A Handful of BokChoy

Some Water Mixed with 1 Tablespoon of Cornflour

1. In a Pot, add in the rinsed rice along with water and some salt and cook it.

2. To make the marinade, in a bowl, add in the gluten free soy sauce, apple cider vinegar, brown sugar, honey, garlic, ginger and mix it up. Pour some of the marinade onto the salmon and mix well. Leave the extra marinade on the side.

3. In a pan, add in some oil and stir fry the garlic chips with some salt until crispy and remove.

4. In the same pan, add in the bakchoy along with some salt and let it cook for about a minute, covered. Once it’s wilted, remove it from the pan and set aside.

5. In the same pan, add in the portobello mushrooms and season with some salt. Stir fry it for awhile before adding in some water and covering with a lid to let it steam for awhile for about 2-3 minutes of each side or until cooked.  Once cooked, flip it over onto the cup side and spoon over some of the teriyaki marinade that we made earlier. Let it cook for about another 1 minute and set aside.

6. Wipe your pan clean, and over medium heat add in your salmon. Cook the salmon for about 1-2 minutes of until cooked. Then, set aside.

7. To make the sauce, add some water to the marinade with the cornflour and. Mix it around.

8. In a clean pan, add in your marinade and let it simmer until it thickens. Then remove it from the heat and set aside.

9. To start plating, add some rice in a bowl, along with the mushrooms, salmon, vegetables  and drizzle over the cooked teriyaki sauce. And garnish with the fried garlic chips and some chopped spring onions. Serve immediately. 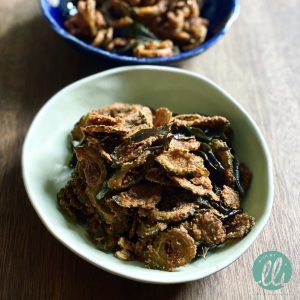